Giovanna is a HealthTech entrepreneur, writer, bon vivant and mother of two fabulous daughters. She was born in Hove (actually) and after attending Mayfield School, learned how to be a top-flight PA in Cambridge. 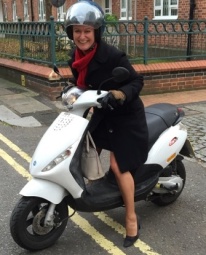 Arriving in London (1983) to forge a sparkling secretarial career she decided to add some strings to her bow and embarked on a number of evening classes at the City Lit.

Dreams of founding a lingerie emporium took her onto a retail course. Fantasies of marrying the next Arthur Miller led to two terms of play writing instruction.

But it was the freelance journalism class that really captured her imagination. Ms Forte’s first piece appeared in the top monthly glossy Over 21, in December 1985.

The secretarial career blossomed into roles within PR and marketing but Giovanna became self-employed in 1990 so she could work from home when FirstBorn arrived. By the time Youngest-of-All came along two years later, the business had grown.

From modernist architecture to luxury vodka, Soho-based Forte Communication conceived and managed long term sales-led PR strategy for clients, much of which involved the written word, published in professional and consumer magazines.

In 1998, she authored a series of monthly interior design features for a London lifestyle magazine, the name of which is lost in the mists of time …

As her successful PR career blossomed, Giovanna’s GP brother Dr Vincent Forte designed a nifty medical device to deliver accurate urine samples to diagnose and treat women’s Urinary Tract Infection promptly, with the right antibiotic. Untreated UTI is the biggest problem the NHS doesn’t know it has but because it is largely a women’s issue …. well, let’s not go there now. When he asked Giovanna to assist, she did; the communication business was closed down … and Forte Medical was born – and is doing brilliantly.

Giovanna is also founder of Face to a Name Campaign, designed to help the elderly retain identity and dignity in hospital, a campaign worth perseverance, although time is something of a challange.

The Goddesses
FirstBorn graduated from Liverpool with a First in History and Hispanic Studies (distinction in spoken Spanish and Basque), has lived and written from Mexico, Georgia, Istanbul and Myanmar. Happily she is now closer to home, a qualified (with another distinction) Aromatherapy Practitioner, mental health worker and author: you can read some of her remarkable work at The Culture Trip.

Youngest-of-All is a professional and highly accomplished patisserie chef. Having trained with Hix she spent six months creating desserts at the Albion and Boundary before moving deeper into her area of expertise at boutique patisserie Violet, maker of the recent Royal Wedding Cake. Since 2016 she has purveyed her craft in Melbourne with Russian-born, Californian-bred, Michelin-Starred Chef Boris Portnoy, at his unique Northcote patisserie All Are Welcome. She is working up to the launch of Monforte, her own Neighbourhood Bakery on Wheels. I miss her.