Brighton: a weekend away with the Boss 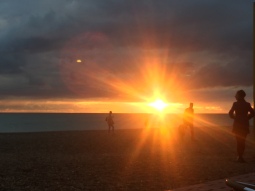 He proposed the idea with such excitement and enthusiasm that I felt guilty saying no. It just didn’t feel right, didn’t strike the right chord.

No brought dismay and disappointment to his face and for several days he tried to persuade me: you won’t regret it! Second thoughts softened my intransigence and by the time he canvassed a mutual friend – who thought it sounded very much like great fun – I began to wonder if my attitude was a little dated?

It transpired then, that one bright and sunny early November afternoon – my decision having undergone a u-turn – I found myself pillion behind a very happy man, on a highly polished 500cc Royal Enfield. We traversed suburban London into more open B roads, cruising happily cross-country to the place of my birth: Brighton and Hove.

The sun lifted the chill from this Friday afternoon and the ride was far lovelier than anticipated; I was free to look around, to observe, to think. The machine in question is not only a handsome beast, but a smooth ride too; BB’s pride and joy, The Enfield carries his initials on its personalized plate: B055 DLH.

We reached our destination some three hours after leaving East London; the streets were dark but the lights glittered a lively welcome and every breath of salty sea air suffused me with glowing contentment, for this city is quite simply Brighton and Home.

Our weekend away was timed to coincide with the celebrated Lewes fireworks and to pamper the man whose birthday I have twice missed due to business trips away. It transpired that two nights at One Broad Street, was exactly what we needed.

Quick shower and change effected, we jumped into a taxi to The Coal Shed, where great friend Bad Alan awaited; a Professor of Architecture, BA is clever and funny, the fine twinkle in his eyes testament to a full life, well lived. The night did not end with dinner of course but with cocktails, BA’s gloriously warm bonhomie keeping us entertained.

Any day that follows a night out with Bad Alan starts slowly and this Saturday was no exception. BB decided to recce Lewes in advance of our fiery evening adventure, while I dozed then strolled through my city exploring the evolution that has taken place over the years. Brighton still boasts its famed air of a faded mistress, but here and there it could perhaps do with refreshing its make-up even just a touch.

Brighton’s prom however, is clean and cared for; bars and galleries colonise the wide arches that extend under the road above. We strolled in the crisp early evening air, taking in a glass of wine by the beach and watched a glorious sun set into the sea. Memories of earlier times came into focus, myriad sunsets seen from my father’s cafe that lay not a hundred yards from where we sat now.

Fireworks were the stimulus for this destination and weekend because BB loves them; he loves flame pure and simple and is an accomplished fire-dancer. In the early days of our courtship he wooed me by stripping to the waist to stage an impressive fire show; my very own.

At 8pm the B055 took us smoothly and swiftly towards Lewes, necessarily cordoned off to traffic; we parked a mile away, walking into the ancient town with hundreds of others. The main street was filled with people parading in historic costume; firecrackers sounded all around, smoke and sulfur dissipated through the air, infusing the atmosphere with excitement and anticipation.

Navigating our way through the crowds, we found an alley that led to the back streets, where we picked our way up and down lanes and passages in search of the footbridge where BB promised the finest view of the main display. We were not disappointed; from our vantage point we saw not only this extraordinary show, but two others, too.

For over an hour the most intense and dazzling pageant of light and sound filled our eyes and ears; sparkling stars exploded into strings of glittering and brilliant beads that belied the eye by seeming to fall so low we felt we could reach up and touch them. All around, flawless, flaming fireworks filled the sky, dancing, waltzing and finally floating down, down, melting into their own reflection within the River Ouse below.

Tired now but still fizzing with firework drama, we began our walk through the town, back to the B055. The streets were suddenly empty save for gaggles of merrymakers, some the worse for wear, but most like us just happily wending their way.

Approaching Brighton over the Downs we stopped to pick up a bottle of scotch, the single thing we knew would bring warmth to our now frozen veins. At Broad Street, we curled up, defrosted, chatted and sipped our amber nectar. At 2am, I accompanied BB downstairs where he lit up; perched on the doorstep, we peered either side to find others doing much the same on adjacent steps; we were surrounded by late-night camaraderie.

A couple approached our B&B in some disarray, he clutching a take-away and swaying. I want to stay out, he announced to us, but she won’t let me! She glowered at him. As he shook BB’s hand congratulating him on being out she seized the bag of food announcing You can stay, but I want dinner! The door slammed in his face and he swayed gently, bafflement spreading across his blurry features until the door swung ajar, just enough to accommodate a woman’s arm.  Her hand grabbed him smartly by the collar; the last we saw of our new friend were the soles of his shoes disappearing into the house.

As our mirth subsided, a door opened across the road. A young fellow lit up, spotted us and came over; as we chatted, a girl left his building. Don’t shut the door…. He called as it clicked shut; he was without keys. She apologised, he ran over, she left, he knocked, rang bells, called up to different windows then turned, spied her at the top of the street and ran after her. They returned arm in arm and as they kissed on the doorstep, the front door opened. She smiled and walked away, he waved happily and disappeared inside.

These vignettes, this real life theatre were just the finale we needed. Clutching our now empty tumblers, we let ourselves back in and retired to bed.

Our Brighton weekend drew to a close but not before coffee with a beautiful schoolfriend, a precursor to the early afternoon ride to London. Tired now I appreciated the opportunity for silence, to look around, taking in the sights and sounds of suburbia. Approaching Purley we passed a sign for the Surrey Crematorium. Why, I thought, is it not called the Purley Gates? Riding pillion gives one time and space to think silly things.

And so dear reader, it was in happy disposition that we arrived home to hot baths and a warm bed, the wonderful weekend already a bright, bejewelled and cherished memory.

A secretary at 19 and self employed at 26, Giovanna has become a British healthcare entrepreneur. She is also a bon vivant and mother of two clever and accomplished daughters. Youngest-of-All is a talented Patisserie Chef living and working in Melbourne Australia (if you are there, visit All Are Welcome in Northcote). FirstBorn is an Aromatherapy Practitioner (with distinction), a published author and documentary journalist who lives wherever her mood or investigations require. Happily she is currently in the UK.
View all posts by fortewinks →
This entry was posted in Art, Entertaining, Family, Friends, holiday, Life and romance, London, Travel, Uncategorized and tagged boyfriend, Brighton, Cocktails, fireworks, happy, Lewis, mototbike, promenade, Royal Enfield, sea, seaside. Bookmark the permalink.