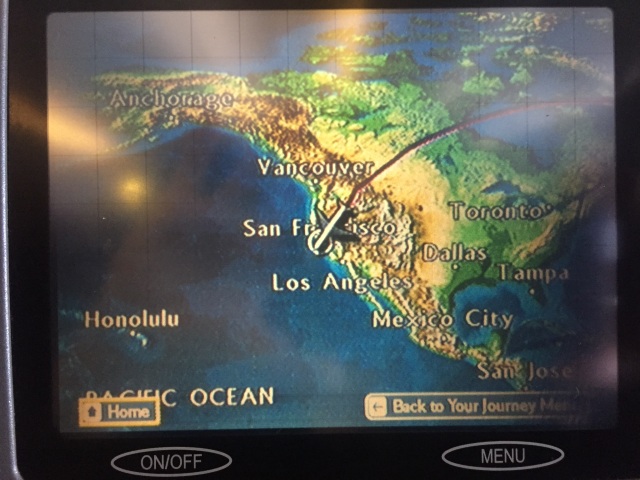 It was all going so well. My arrival at Heathrow in better than good time, the security experience easier than usual (I didn’t get stopped – a miracle) and time to drift through the stores in wonderment at the nonsense people feel compelled to buy at airports.

We boarded on time. I settled into my seat, stowed Private Eye and Guardian for later reading and awaited lift-off … only to find we were all waiting in vain. The intercom crackled into life: A strange occurrence has occurred, said our Chief Flight Attendent. A mouse has been  found on board. We cannot depart with a mouse on board.  British Airways regrets, that all passengers must disembark. We have been assigned a new aircraft and expect to have you and your bags transferred ….  Amusement tempered mild annoyance and within minutes I was back in the melee of Duty Free … As entranced by the Chanel lipstick counter as a child in a sweet shop. Nonsense indeed; each candy colour smudge on my hand, every gentle nod of acquiescence to the sales assistant declared me guilty as charged.

Three hours later and lipstick-rich, I embarked upon the flight to San Francisco; good films, good food and good wine helped the hours slip by. In SF, I made my way to Information, where I asked for a recommendation to reach Palo Alto. We cannot recommend, the Information Attendant informed me. We are here to answer questions. I tried a different tack and was soon two floors up, staring at the BART ticket machine, with bafflement.

I heard you ask about getting to Palo Alto, said a kindly voice. I am heading for the stop after you and don’t know where I’m going either. How about we join forces and get there in one piece … or get lost together? Keith and I duly joined forces; he to see his Grandson and a first visit to his own son’s home – I, destined for a meeting critical to my business.

We were both nervous and relieved to find a friendly travelling companion; Keith and I got along famously. Keith is a recently retired civil, structural and environmental engineer who was involved in converting traditional power stations to run on biomass. I explained my line of work and there ensued a deep and detailed conversation about engineering, technology, design, manufacture and their implicit yet often unsung roles in helping the world turn smoothly on its axis. As our conversation ventured here and there, we each caught the other observing the frozen nose-to-screen demeanour of our on-board compatriots and agreed: Hell! People just don’t see the world around them any more …

Palo Alto arrived all too soon. Keith and I shook hands; what an absolute pleasure to have met him and to understand that despite his experience of life over 60-something years, he was still nervous and excited about engaging with the boy who is now his adult son, and with the small and lesser known Grandson. A testament indeed to the fragile and tender human condition.

I stepped onto the platform at Palo Alto intending to clamber into a cab. Every station in the world plays host to a taxi rank – or so I thought. But this is twenty-first century; the suburban taxi-rank (and independent enterprise that goes with it) has been eroded and userped by UberWorld. Spying the station cafe, I dragged my excessively large case across the concourse and enquired of the Barrista: How do I get a cab around here?  His eyes narrowed to peer over my shoulder: If there ain’t one under that tree over there, there ain’t one.

Adjacent to that tree over there was a Transit Centre – a bus station to you and me. I trundled into its midst and looked around. Of the few passengers-in-waiting, the most approachable was an evidently homeless gentleman who not only kindly disabused me of the time it might take to walk to my hotel (understanding distance on map-scale is not my forte, as it were), but told me which bus to take, what to say to the driver and when I might expect to arrive at the establishment in question. We had a brief chat about London – he had visited in happier times – before I left him with much gratitude and the wherewithal to buy an evening meal. The number 22 duly arrived when he said it would; I confirmed with the driver that she would drop me at the Creekside Inn, and found a seat.

Boarding with me were the disparate, now familiar faces from the wait: a stressed woman with three children, a rotund gentleman with woolly beanie hat, an elegant elderly lady with Zimmer frame and a rather cirucumspect Hispanic couple who stared in wonder at all around them.

You’re British? From England? The lady on the seat opposite addressed me directly, her worn clothes a contrast to the newer apparel of her three children. They were all  mesmerised by my accent. Dear reader, there followed a lively exchange that excited comment, question and opinion from almost every passenger, and which embraced the Queen, Scotland, bearskin hats, Beefeaters, London buses, whether Buckingham Palace is more House than Palace, British weather and more.

I’ll never get to London, said my new best friend. I only have one lung working – and these kids. It will never happen. I looked at the children looking at their mother, faces etched with resignation. You never know, I thought out loud to the window. You never know what’s round the corner. If you focus on the problems, you might miss the opportunity.  Anything can happen if you want it to. Even going to London. I never thought I’d come here either.

Mum stared and I thought she was going to shout at me – I could only imagine how difficult life is for her, after all. Maybe she sensed that I meant well though, for she considered, nodded and said: I hadn’t thought about it like that. Thank you.

Glancing back to the window I caught the reflection of Beanie Man, whose face had spread into a broad sunshine smile; he looked for all the world like a jolly emoji. By now, chatter filled the bus and upon alighting at the Creekside Inn I was waved on my way, feeling peculiarly happy and sad.

The average price of a decent hotel in Palo Alto is steep. By comparison, the  Creekside Inn delivers an upscale motel at modest incline, with room service until 9pm. A Caesar Salad and glass of Pinot Noir duly arrived, the salad less Caesar more Assorted Field, but by now very welcome.

I showered and turned in, mind flitting here and there over my day, full and rich with experience and I counted my lucky stars. Drifting to sleep I realised that despite its highs and lows, in spite of the bumps and bruises it metes out to us, the world can still deliver kind and interesting people. With ten days of travel ahead,  I set myself a question to consider each night .. quite simply: who might I meet tomorrow?

A secretary at 19 and self employed at 26, Giovanna has become a British healthcare entrepreneur. She is also a bon vivant and mother of two clever and accomplished daughters. Youngest-of-All is a talented Patisserie Chef living and working in Melbourne Australia (if you are there, visit All Are Welcome in Northcote). FirstBorn is an Aromatherapy Practitioner (with distinction), a published author and documentary journalist who lives wherever her mood or investigations require. Happily she is currently in the UK.
View all posts by fortewinks →
This entry was posted in Uncategorized. Bookmark the permalink.