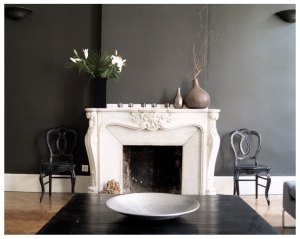 42 Rue Victor Hugo, Carcassonne, is the B&B for those that enjoy a high-pamper factor. Nestled in the ample bosom of the Languedoc, this retreat has much to offer, although not as much as its hosts, the warm and welcoming  Peter Woodcock and Debrah Smith.

Peter and Debrah abandoned London a few years ago, for something a tad better than The Good Life: their version comes with a French kiss.

The new Woodcock-Smith world is the stuff of dreams. Based in the custom-designed office at the heart of their sumptuous B&B apartments (all created by her), Debrah (a raven-haired Marilyn Monroe) conducts her design business, with flair and aplomb (she’s currently orchestrating a fabulous project for a posh British food retail specialist).

Meanwhile, Peter runs the luxury B&B; a well-oiled machine, 42 Rue Victor Hugo attracts guests all year round from across Europe, mainly the UK. He is handsome, charming and for the women, exudes a wonderful avuncular flirtation; the men benefit from a natural blokishness – there’s little he can’t engage with, be it rugby or cricket, fine wines, or the truffle season.

Peter is known locally as “Monsieur Le British Chef”; he conducts wine tours, he hosts lavish dinners. But dammit, slaving over a hot stove in France for grateful paying guests is so much more rewarding than working spreadsheets for one of the world’s most successful London-based advertising agencies, where he held long tenure as Finance Director.

My nights at Number 42 were spent in The Apartment, an elegantly decorated and furnished place. The huge sitting room has French windows (natch) overlooking the street, from where I could smoke my menthols (sorry Peter) and people-watch, pouring from time to time, tasty wine from the expertly appointed mini-kitchen. After nightly forays into town, I sank into the decadently large bed, which took up most of the simple but dramatic bedroom (with en suite).

Was I happy? Oh yes. A Languedoc Lady – a Princess, no less.

“We’re taking you to see the fireworks,” Debrah announced on night two. Really? Fireworks, I thought, are never great. Oh dear. Little did I know that The French truly know how to set these glittering babies off to best effect.

These were no ordinary fireworks, they were incredible Bastille Day flames: layer upon layer upon layer of bright metallic shards, bursts and showers of flaming strands leaving smoky tentacles, which were obliterated by the next bursts of layer upon layer. They came from so high in the sky and unfurled crazily, into billions of beams that fell low, so low we could almost touch them  … And then they set the Cité alight – for all the world, the ancient battlements were aflame. My face was too small for my smile. Giovannina, aged five and a half.

Afterward, we sat in the lovely market square, chewing the cud, supping glorious rosé, and I soon found myself curled up in bed, head fizzing with visions of an incandescent world.

The earlyish night was all to the good, given our lunchtime foray to the legendary Carcassonne Market. We meandered through stall after stall of gourmet food – mushrooms, herbs, saucisson of more varieties than I can cover here; tongue-tingling olive oil … for a food-loving girl like me, this was unadulterated heaven. And some of the more pleasurable lbs I’ve ever embraced, for sure.

And so to a square even deeper inside the town, where myriad people lounged over freshly grilled langoustines, platters of local delicacies and, er, wine. Lots and lots of wine. We approached an interesting looking table, colonised by handsome people. Dangerous people. I know this now: would that I had known this then, I’d have got there earlier.

These two were, however, more interesting than most. A Rogueish Gent and Glamorous Blonde, both twinkling rather more than was decent for Saturday lunchtime. No ordinary duo, this was Weddingcar Riley and Jane. Yes, dear reader, you read that right.

Weddingcar is a former M15 Manhunter (Paraguay and Ecuador) and Jane, an equally mysterious (delectable) character. English expats both, hugely entertaining and ridiculously good fun. Would that I could fill you in on the meat and frites of the afternoon, but alas, my most distinct memory comprises my own words: “I don’t think I can drink any more.”

42 Rue Victor Hugo rest assured, is an adventure, a joyous discovery of life beyond London, with people who’ve been here and left for there, who have settled in gentler (although no less alcoholic) climes. Peter and Debrah, I salute you.

A secretary at 19 and self employed at 26, Giovanna has become a British healthcare entrepreneur. She is also a bon vivant and mother of two clever and accomplished daughters. Youngest-of-All is a talented Patisserie Chef living and working in Melbourne Australia (if you are there, visit All Are Welcome in Northcote). FirstBorn is an Aromatherapy Practitioner (with distinction), a published author and documentary journalist who lives wherever her mood or investigations require. Happily she is currently in the UK.
View all posts by fortewinks →
This entry was posted in Food and wine, Friends, Life and romance, Travel and tagged Uncategorized. Bookmark the permalink.