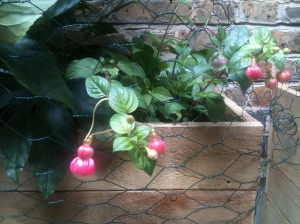 Writing a story about a yard seems unprepossessing by any stretch of the imagination, but bear with me if you would. Because this is in fact a rather touching tale of how an Ugly Duckling Yard grew up to become The Oasis.

During our four-year tenancy of this house, the yard has been an unloved, sheltered space of grey-brown paving surrounded by London Brick. One wall is the back of our house. Of the remaining three, two belong to Rumpelstiltskin, our neighbour to the right; the fourth is the party wall between us, and the far lovelier neighbour to our left.

During our first summer, efforts to colonise the yard were foiled by Rumpelstiltskin, whose living room window overlooks it. The moment conversation warmed up, he would throw open his window and in melodramatic Shakespearean tones bellow: “You’re ruining my life!” If we failed to scurry indoors his proclamations would become more ridiculous: “I’m a Barrister!” and “I know your landlord!” Whilst none of this either impressed or cowed us, the green shoots of any private outdoor enjoyment were summarily crushed.

Thwarted, we abandoned our yard, seeing thereafter only a joyless, sunless spot. Our cats quickly claimed ownership and adopted it as an outsized litter tray. The battle waged against their regular deposits was sporadic and depended on the weather; have you ever tried to remove rain-soaked feline detritus? It is a thankless, gagworthy task. We didn’t use the yard, far less look at it. It ceased to be noticed.

Then Rumpelstiltskin himself became the catalyst for change. We awoke one day to find two Polish builders outside our house but inside our very own yard, putting the finishing touches to a new window punched into the wall opposite our kitchen. No permission had been sought by our charmless neighbour for this intrusion, far less a courtesy call to ask if we minded two large Poles shuffling about in our private domain.

A fuss was duly made and sneered upon in condescending, Barristorial fashion. The second time I found the Poles in my yard, what I had to say and the steady, low tones in which it was said, caused the Window Two to squeeze back through their client’s narrow living room window with what can only be described as urgency. I was happy to witness a compelling and delightful reprise of Winnie the Pooh struggling into Rabbit’s burrow. Where’s the camera when you need it?

A treaty was eventually reached and the window finished; it became the main feature of the view from our kitchen. Fueled by resentment and indignation of this blatant overlooking, not to mention trespass, we agreed that our neighbour must no longer be allowed to dictate how, or when we use our outside space. We shall recolonise it and Rumpelstiltskin be damned!

Time, then, to assemble the A Team.

The clever, amusing and very-good-with-his-hands Paul was promptly invited to view the potential of the yard and offer his professional opinion. He outlined a simple and affordable way to transform it into something we could enjoy, that over time would grow to become an urban oasis. We have no intention of moving any year soon and so Paul’s good ideas became a project.

While he got cracking, David, the authority on all things horticultural, provided a list of greenery that will flourish without a great deal of direct sunlight. Or, removing the PR to which I am prone: with negligible direct sunlight. In addition to the Plantfolio, feeding and care instructions were given, together with directions to the best nursery.

Paul completed his work the following Friday. On Saturday I cycled over to Growing Concerns, East London’s premier nursery, staffed by kind and patient people who were perfectly happy to assist your inexperienced author. They looked at pictures of our new planters, consulted David’s list, gave me a tour of those they shortlisted as most appropriate for the setting, and gently encouraged my confidence.

Over my lifetime I have succeeded only in causing anything green and leafy to wilt and die. Lorraine at Growing Concerns assured me that things would be different now. Thank you Lorraine; I believe you may be right.

Within a week, my plants were delivered along with a ton of soil. This latter I expected to arrive in a number of large bags. Oh no. It arrived on the back of a truck and was unceremoniously craned onto the pavement outside my house. If you don’t know what a ton of soil looks like, dear reader, it is a lot.

A nano-moment of hesitation was diffused by a tingling, consuming excitement. Here were the ingredients I needed to create a whole new room outside the kitchen. Here were the means by which I could explore a brand new world of interest, of hitherto unfamiliar green and pleasant things.

With sleeves rolled up and gardening gloves pressed into service, it took less than two hours to decant 90% of the ton into my four planters and I confess: I enjoyed every moment. But better still was the process of planting my new babies, of settling them into their new home, of watering them and sitting in the middle of The Oasis, enveloped by the rich aroma of moist soil; heaven-scent indeed.

The few short weeks since then have witnessed a number of battles with the cats although all the plants are now protected by green wire to prevent inhospitable parcels being deposited amongst the leaves and soil decanted onto the paving. The plants are growing and happily finding their way through the large gaps. Most of all they and my herbs are safe; as yet, not so the paving. Battles are being fought, but the war drags on. They are getting the message: I will win.

Every day when I arrive home – and far more often at weekends – I take a stroll around The Oasis to inspect my (and nature’s) handiwork. Last week, to my untold delight, tiny pink Fuchsia buds burst into flower, and my heart followed suit with pride.

My Fatsia will grow high and cover the new, offending window. The Bergenia will flower once the trailing Fuchsia’s fire is dimmed and I am surprised to find that my fascination with this new interest also grows daily.

The project hasn’t been without interference from Rumpelstiltskin; during the building process, he barked at Paul demanding that no nails touched his walls. When The Exocet ventured outside to admire progress, he opened his window to opine: “This is better than cat mess. I hope it stays this way.”

That the objectionable fellow is soon to be camouflaged behind big beautiful leaves is cause for contentment indeed. There is still work to be done: modest seating and perhaps a tiny table to be acquired with a few more pots to perfect the Plantfolio. With some delight, I identified two small but super-firm brackets on opposite walls that are about to host a thus far unused hammock-made-for-two, from where unfettered conversation will most certainly flow.

If this soggy summer ever saunters into sunnier days, The Oasis will come seamlessly into its own. All that remains to be settled is a date for The Garden Party; the first of many.

A secretary at 19 and self employed at 26, Giovanna has evolved from PA to PR and now a British healthcare entrepreneur. She is also a bon vivant and mother of two clever and accomplished daughters. Youngest-of-All is a talented Patisserie Chef, founder of MonForte Viennoiserie, Melbourne's finest destination for pastries both savoury and sweet. FirstBorn is a self-employed Aromatherapy Practitioner, a published author and documentary journalist who lives closer to home in East London.
View all posts by fortewinks →
This entry was posted in Family, Friends, Life and romance and tagged Bergenia, Fatsia, garden, garden furniture, Gardens, hammock, London, London Brick, paving, planting, plants, Rumpelstiltskin, soil. Bookmark the permalink.