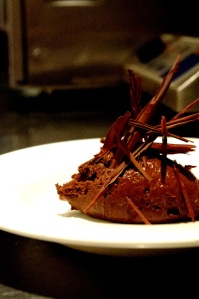 East London: a place of many textures and many tastes is now inextricably linked – for me – to the sating of a raging appetite for good food and great wine, at friendly places.

But how times have changed. In 1986 I met my future husband on the stairwell of 8a West Smithfield, above Ferrari’s sandwich bar (it’s still there). Apart from a Friday pint at the Bishop’s Finger next door, the area had little to offer but a sawdust floor at long-gone Burgundy Ben’s basement bar, on the Clerkenwell Road. There were one or two unremarkable restaurants in the area, but it wasn’t until 1991 that The Eagle opened on the Farringdon Road, and things began to evolve.

Further East, in 1998, the opening of The Cantaloupe on Charlotte Road caused quite a stir; the chargrilled dishes and rocket salads served up here were almost revolutionary.

Real change was heralded a year later, with the arrival of The Eyre Brother’s cafe next door. Chef par excellence David, co-founder of The Eagle, and his brother Robert, created a legendary spot, serving the most robust and exquisite dishes from a tiny space of organised chaos. Robert’s reputation as an expert Ambianceur was honed here; a disorderly queue would form at around 9am, along which word would be passed, as to the exact mood of Front of House. If negative, the queue might dissolve as if by magic; if positive, a cheerful demeanour would descend on those present and coffees duly ‘corrected’, with a hey-nonny-nonny and a whistle in the air.

The Charlotte Road venue was, as it turned out, merely a warm-up act for the more sophisticated, much larger eponymous restaurant that opened round the corner on Leonard Street ten years ago. I’ve shamelessly extolled the virtues of the Eyre Brothers before, so perhaps all I need to add is: Grilled Mozambique Tiger Prawns; Paella Valenciana (to order), Iberico Pig, David’s very special goose-fat roasted potatoes and the best Tapas menu in London (the Gambas are to die for).

The Eyres’ original tiny space now is occupied by Ruby, founded by Lino and Afram where some of the best lunchtime nosh in Shoreditch is served to queues even the Eyres would have been proud of. Made on the spot, to order, delicious, perfectly cooked risotto and pasta; ciabatta sandwiches that contain tender, grilled haloumi and vegetables, rare steak and juicy chorizo. Even the avocado and chicken salad is sublime … but the eternally twinkly Afram has a bottle of something special that he sprinkles onto certain dishes; he won’t let on what’s in it … but its addictive. Meanwhile, co-founder Lino has opened a sit-down counterpart in Hoxton Square. Every bit as good, this bustling, busy Ruby is a regular lunch spot for my former-future-now-ex-husband and I; much much better than the Smithfield pint.

Staying in East London’s Italy, we’ll visit Gianfilippo Mattioli at the Bottega Prelibato on Rivington Street. A week or so after it opened in 2008, I entered to enquire about olive oil. Without missing a beat, I was invited to sit, relax. Four small bowls were set out, each filled with different extra virgin oil, and then some bread arrived. I was exhorted to “Try!” I tried. I loved. After successfully dealing with an uncalled for fuss from the licensing people, Gianfilippo has been serving wine with his delicious Italian food for about a year now, and stays open for dinner. The Bottega is unhurried, ambient and delightful.

A few doors down, on the other side of the road is The Rivington. Formerly a proper early 90’s cocktail bar with marvelous, neon fascia and decorative umbrellas in its drinks, it passed into the hands of the Caprice Group. Out went the flourishes, in came understated urban chic, British dishes and flavourful things on toast. Today, Chef Simon Wadham’s Mushroom Sausages are a hot favourite. They came off the menu briefly, but have, happily, reappeared. Two larger than life croquettes, stuffed full of delicately flavoured Portobello wonderment; accompany with a glass of Merlot. There’s a great deal more at the Rivington, not least the luxury burger, but if we’re moving on to meat, then we need to stroll over to Hix, in Farringdon.

The first of Mark’s growing empire, Hix Oyster and Chop House is tucked off Cowcross Street. My first visit was shortly after he opened, hungry enough to embark on a (shared) Porterhouse Steak. If you’ve never had melt-in-the-mouth meat before, this is it. But precede with a starter of Dalston, home-smoked salmon that boasts mystical buttery qualities you won’t have encountered before, in any kind of fish.

I should now extol the charms of the Hix dessert menu, but heaven forbids nepotism in a blog, for the Chef de Partie in charge of desserts and pastry here, is none other than my own progeny Giorgia McAllister Forte. If you visit, don’t forget to leave a generous tip for the kitchen.

Scrumptious pastries can, however, also be found back in Shoreditch, at The Albion on the corner of Boundary and Redchurch Streets; a light and airy café with grocery up-front, this place fills up early, so I tend to swing by and pick up a couple of affordable treats for lunch. My favourite combination is a juicy Stilton and walnut salad with the Albion’s own brand of potato salad. Like Afram’s aforementioned magic, there’s something addictive in this confection; I just keep returning for more.

This first foray into East London food doesn’t venture far enough I know, but there simply isn’t time to finish my foodie trail now. Another day, we’ll explore the Cay Tre (arguably the best Viet in the area), Tayyabs for curry, Bistrotheque (Prix Fixe option for both lunch and dinner) and the highly original, perfectly formed Rochelle Canteen at Arnold Circus.

For pizza, we must stop off at The Furnace (for the Del Mare) and Stringray Globe (the Vegetariana). And for tasty bits, my own neighbourhood Brawn, on Columbia Road, where “taste ticklers” include chunks of Parmesan or quails eggs at £3.

Rest assured, we’ll venture forth again soon for more digestive delights. In the meantime, you don’t need me. Go ahead: step into the culinary playground, and have some fun.

A secretary at 19 and self employed at 26, Giovanna has become a British healthcare entrepreneur. She is also a bon vivant and mother of two clever and accomplished daughters. Youngest-of-All is a talented Patisserie Chef living and working in Melbourne Australia (if you are there, visit All Are Welcome in Northcote). FirstBorn is an Aromatherapy Practitioner (with distinction), a published author and documentary journalist who lives wherever her mood or investigations require. Happily she is currently in the UK.
View all posts by fortewinks →
This entry was posted in Food and wine, London and tagged East London, Farringdon Road, Hoxton Square, Italian cuisine, Leonard Street, London, Rivington Street, Shoreditch, Uncategorized. Bookmark the permalink.