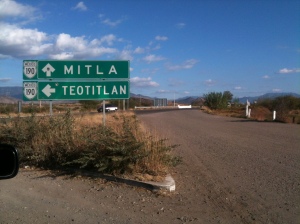 Where are Butch Cassidy and the Sundance Kid?

Bethnal Green is where we usually congregate with family and friends to spend Christmas, exchange gifts and enjoy hearty food. But this year, we abandoned our home in East London to gather in Mexico, for what transpired to be the happiest time of my life.

I had good excuse to take youngest-of-all Giorgia and I to sunnier climes. For in Mexico City resides Alessandra, my Tornado eldest daughter who is there until September working on the project she created to fill the third year of her History and Hispanic Studies degree.

Arriving in Mexico City a few days in advance of Giorgia (Exocet), there was a minor commotion at customs, for I was caught smuggling. A uniformed operative examined the arrival form on which I professed not to be carrying illegal substances. She opened one of my suitcases and with cursory but disdainful glance, dug her gloved hands into the contents. After some concentrated excavation, she withdrew the offending packages: two blocks of incredibly strong mature Cheddar cheese. Dairy products. A no-no.

My rueful smile must have disturbed her antennae … back in she went, to emerge triumphant with the third block. My heart sank.

I was ‘let go’ with a warning and a receipt for the cheese. On the other side, the embrace I received from the Tornado made it all worthwhile. As did my realisation that they hadn’t found the Stilton!

After a fitful sleep, my first day in Mexico City was hazy but wondrous. We walked, we talked; we stopped to gaze at buildings of an age and scale I hadn’t imagined. Achingly beautiful architecture, huge intricately carved palaces; history and grandeur cast in stone. And drunk.

Not us, the buildings. Mexico City is on the lurch, as evidenced by steeples and towers that sit at alarming angles. The Tornado explained that Mexico is built on the site of a lake, emptied by pioneers in search of gold believed to lie at the bottom. Faced with a distinct lack of precious anything, the intrepid adventurers built a city instead. A sinking abeit very beautiful one.

When darkness fell, we ambled up the road, to Plaza Garibaldi, a square colonised by the Mariachi. Here, mayhem unfolds every night; groups of men in black suits with silver leg-stripes, play trumpets, saxophones, guitars, xylophones and accordions. And they sing. Oh, the singing: jazz here, a military tune there, a ballad over in the corner – and next to that some traditional Mexican songs, all the while couples young and old forget their woes (a-plenty in this town) and dance, spin, laugh, haphazard, happy, carefree, crazy.

Mexico City comes alive at night and the following evening brought more madness; we met up with Gorgeous Jorge, one of the Tornado’s many handsome male friends.

I was taken to a beginner’s Salsa Dancing Class. In Spanish. Without revealing too much of the shame I endured in this hour, without expanding on my lack of balance and coordination, without describing my inability to move because of ill-contained laughter, know only that my Mambo and my Cucaracha elicited delight in the Tornado and commensurate dismay in our teacher. The Tequila and Tacos we devoured thereafter were well deserved.

Happily, the following day brought a dignified delight: a trip to the Pyramids at Teotihuacan, with the warm and welcoming Mr and Mrs Sanchez and Sons (Mexico boasts an extraordinarily beautiful brand of boy and Alessandra, a very good eye.)

We started the day with late breakfast before setting off in the Sanchez family car, parents up front and the four of us squeezed behind them. But not for long. Sanchez Snr stopped the car, the boys got out. There was a brief discussion, the boot opened and closed and one son rejoined us on the back seat. The other had, it seemed, been folded up into the boot. This is, apparently, perfectly normal procedure, carried out across generations – but not just in Mexico. I spoke to someone about this in London the other day, and unperturbed, they confirmed that they too as children, had traveled with their siblings in the boot of their parents’ car. On this practice then, perhaps my sheltered life has not been as sheltered as some.

And so: with a Boy in the Boot, we arrived at the huge and beautiful Pyramids, oddly desolate despite the number of visitors clambering around their inclines. We walked about ten kilometres that day, up, down and around this breathtaking pre-Aztec city, discovered deserted, with scant evidence of an organised people whose lives revolved around the moon and the sun – each represented by one of the monumental Pyramids.

We concluded the day in a cavernous restaurant; I don’t mean it was deep and high, more that it was a huge rocky subterrane within which were clusters of tables and happy diners, friendly waiters and delicious food. My waiter almost excelled himself. Receiving my post-prandial request for an Americano, he asked “With blue eyes?” Presented with a mere black coffee I had no choice but to enquire: “Dónde está Paul Newman?”

A few days into my visit, a tired Giorgia, released from Christmas cheffing duties in London, arrived at 6am; we failed to appear at the gate on time however, because Mother got the terminal wrong. Tornado and I flailed across the airport compound, eventually finding Exocet sitting on her case looking, well, forlorn.

Things picked up and later that day we boarded a coach for Oaxaca, a cultural, historical and architectural joy. Our seven and a half hour journey seemed half that; although tired, I didn’t dare close my eyes for missing the spectacular mountain ranges, the colours, the vast and extraordinary tracts of land, the skies – I didn’t dare miss, well, Mexico.

Our destination lay on the slopes outside the City of Oaxaca. La Villada Inn isn’t a hostel in the received way; it is, according to the resident Cute Canadian, part of an“upscale hostel” world, with pool, terraces, hammocks and well appointed ensuite “cabins”.

Sharing our room-for-three was like a return to Boarding School, but with two people I knew incredibly well. We hardly stopped giggling for five days. In the intimacy of our cabin, I identified sweet traits from days gone by, being vividly reminded for instance of Tornado’s first steps as she strode across the room with identical intent and purpose. Inside Exocet’s gales of laughter, were echoes of her wonderfully robust baby chuckle. How lucky am I, to recapture these and other rare vignettes of an earlier life and make whole big new ones, too.

Christmas Eve was a very different proposition to those past. This scene was set by a spectacular and strangely luminous mountain range, onto which the sun projected rippling cloud formations, somehow giving a fourth dimension to the panorama.

Whilst I lay by the pool, the Girls played it in the upstairs bar and in between turning the pages of my book, I would glance up to observe the far-away shadows, interrupted only by occasional shouts of “Mom! You alright for a beer?”

This would have come from any one of our resident companions, which included Chris the mad Devonian and friend of La Villada family; Michael, an elderly, bearded amateur radio fanatic from Albuquerque; various Mexican family members and Steve, the aforementioned Cute Canadian, a laid-back, guitar-strumming Professor of Philosophy.

That evening, before La Villada’s Christmas Eve Party, the three of us ventured into Oaxaca, which was brimming with festive expectation. Families processed and danced through the streets, little girls dressed as Mary each clutching her very own baby Jesus; people sang, musicians played, street food abounded – and scrumptious it all was, too.

Most bewitching of all was the Son et Lumière projected onto the Cathedral of Our Lady of The Assumption. Out of darkness, white lasers slowly, intricately detailed the building façade and over the next ten minutes, an opulent, fantastical light show seduced us.

On our final full day in Oaxaca, we ventured to sights further afield; El Árbol del Tule, the 1600-year-old tree that boasts the stoutest trunk in the world (over 38ft diameter); more totally delicious corn, bean and spicy salsa combos for lunch; a craft market – and then the Mexican Rug Experience.

Teotitlán del Valle is a world-famous textile-weaving district; it is reached by way of dusty roads reminiscent of every Western movie you’ve ever seen; highways that stretch into the distance, apparently leading nowhere. Except that occasional, small roadside houses and workshops gather in number as you approach the village centre. Here, swanky showroom style properties sit cheek by jowl with the poorest shacks, housing several generations of one family. The common thread between them being the loom in every room, each carrying work in progress, vivid patterns drawn from mosaic, from landscape, from history and culture. Happily, our very own piece of Teotitlán is resplendent, centre stage at home.

In and around all this, our dreamy days at lovely La Villada gave us the best full-body massage we’ve ever had, relaxation, conversation with interesting people, yet more delicious food and a wolf-whistling parrot. But like all good things, it had to end and the day came when we, The Three Graces, boarded the coach bound for Mexico City.

We arrived just before midnight, disheveled and happy, waking late for a slow breakfast, even slower walk around the City and a final visit to the food market to explore the array of bustling aisles crammed with everything good.

The Tornado’s regular stallholders were delighted to meet The Mother and The Sister; we were plied with wine, given samples of delicious cheese, salsa, fruit. Papaya was the Holiday Hit; sweet and juicy beyond – if heaven were edible, it would be made of this.

We spent an hour or so with wine and cheese purveyor Francisco and his sons Enrique and Jesus (who have a pet lion which they feed fresh chickens); then to see Juan Miguel on his excellent coffee stall and who made me blush with pride when he declared “Your daughter, she love Mexico. And Mexico love your daughter.”

What haven’t I mentioned? The incredible clothes market, the fairy-tale dresses worn by 15-year old girls at their “coming out”, cacti, the breathtaking Postal Palace, the world’s second biggest public square Zócalo, drinking far too much Mezcal with Carlos, eating too much of everything and expecting Butch Cassidy and the Sundance Kid to clip-clop round every corner. Only on this last, was I disappointed.

Day ten and with heavy hearts, Giorgia and I climbed into a taxi for the airport. As it pulled away Alessandra waved from the sidewalk and of course, Mom shed a tear or few, not so much in sadness, but in thanks for the rare, precious, heady, beautiful days spent with her Girls. Lucky me indeed.

Travel notes
Our super-stressful travel to Mexico was very regrettably booked with Expedia. Far-away call centres were near-impossible to deal with in the face of last-minute problems caused by an Iberia pilot’s strike. Never again.

A secretary at 19 and self employed at 26, Giovanna has become a British healthcare entrepreneur. She is also a bon vivant and mother of two clever and accomplished daughters. Youngest-of-All is a talented Patisserie Chef living and working in Melbourne Australia (if you are there, visit All Are Welcome in Northcote). FirstBorn is an Aromatherapy Practitioner (with distinction), a published author and documentary journalist who lives wherever her mood or investigations require. Happily she is currently in the UK.
View all posts by fortewinks →
This entry was posted in Family, Food and wine, Friends, Life and romance, Travel, Uncategorized and tagged Christmas, Expedia, La Villada Inn, Lady of the Assumption Oaxaca, Mariachi, Mexican rugs, Mexico, Mexico City, Mezcal, Oaxaca, Plaza Garibaldi, Pyramids, Salsa, Teotihuuacan, Teotitlan. Bookmark the permalink.

1 Response to Mexico: mariachi, mountains, merriment … and my Girls