Circles in Bristol: Architecture, Science and a Brand New Cousin 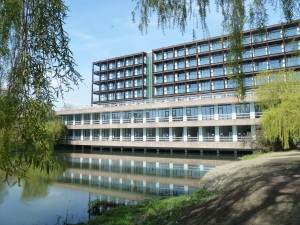 Paddington Station, 3pm, Thursday.  Bank Holiday Weekend began on a train destined for Bristol where my friend would meet and greet me. The journey was spent trapped between the window and a wall of strangely amplified sound: burger and fries being steadily ingested by an obese gentleman in the next seat.

But an hour and forty isn’t long and as the whole train disembarked at Bristol, it was only by keeping my eyes below waist level that I could spot George Ferguson’s trademark red trousers at the gate.

Before I could say Smart Car we were inside his solar-powered George-mobile, skimming noiselessly towards The Tobacco Factory, an exemplar piece of urban regeneration for which he has become justly famous. For his reinvention of this almost-demolished building brought a declining neighbourhood back to life and stimulated myriad independent businesses, which now surround the Factory’s highly successful theatre, restaurant, bar, studios, offices, apartments … and George’s Loft.

Relieved of my luggage, I phoned “B”, a friend from heady Brighton teenage years. He came to Bristol University in the early 80s, stayed and now leads a team of world-class Neuroscientists into research so sensitive that he has been compelled to adopt a second identity. Why? Because finding ways to still the violent shakes implicit to Parkinson’s disease, or arrest the annihilating symptoms of Alzheimer’s and dementia may involve small animals, and there are people in the world who disapprove.

Having touched on our adult lives however, serious matters did not dominate the first real hours of each others company enjoyed for some twenty years. Over delicious dinner at No 1 Harbourside, we reminisced, conjectured and giggled … not least when “B” furrowed his still youthful brow and mused: “Did we ever, um, you know?” our memories made hazy by the fog of whatever we used to smoke in those days (well, that’s my excuse.) Seeing “B” reminded me, though that life long friendship can remain reassuringly intact; the first personal circle of my weekend, came happily into focus.

Home, after a final pit-stop at The Grain Barge, I somehow absorbed my single malt nightcap whilst gleefully enjoying the even tipsier motion of George’s Spun Chair, a joyful piece of furniture and a perfect antidote to my own spins. I slept like a baby.

The new morning brought a hangover; a clear, blinding sun shone into this blind-free Loft … and far too early. But after shoehorning me into the day with tea and toast, George took us to see Ferguson Mann’s latest triumph, created for visionary developer Urban Splash.

Lakeshore is an architectural jewel that takes an arresting 1970s commercial structure seamlessly into a 21st Century, affordable, residential, urban dream-come-true. For this glittering building lies gracefully across a substantial lake colonised by fish and ducks, surrounded by woodlands, wild flowers, sloping meadows and even residents’ allotments glimpsed through tendrils of mature willow – all within ten minutes of the City centre.

Lakeshore’s architecture has been sculpted to accommodate over 600 apartments, conjoined by walkways of colour, astonishing perspectives, internal lawns and gorgeous graphics. Nothing has been left to chance.

Internally, the apartments are light, airy and – oh, the views. George has one set aside, so as to test-drive his own creation for at least three months. In which case he can comment also on the highly prized environmental engineering, of which Lakeshore is rightly proud, for this is a rare example of environmental integrity from a developer.

In the Forte Communication era, a favourite client was the brilliant Patrick Bellew, founder of Atelier Ten, environmental engineer and champion for over thirty years, an influence and activist long before such things became either fashionable or deemed essential to a cleaner world. For Lakeshore, Atelier Ten has created an environmental, system that achieves an uncommon “excellent” Ecohomes rating.

As to my own interest: I was involved in launching Atelier Ten’s role in Lakeshore when the team was put together some six years ago, and seeing the original concept finished in all its glorious concrete and glass, completed a second personal circle. The scheme has already won a Housing Design Award and more accolades must surely follow.

My colourful Bristol day continued apace, with delicious and friendly lunch at Zazu’s Kitchen in Clifton (Celeriac bisque with pesto and sourdough), after which we ventured dockside to tap our toes to crazy music from the Jazz Disaster boys. Then, aboard the Bristol Ferry, I was presented with layer upon layer of waterway-rich architectural narrative, revealing the evolution and history surrounding one of the UK’s most engaging and promising Cities. All of this was punctuated by regular helloing and waving as pretty much everyone in Bristol knows George, and if he doesn’t know them, he’ll hello and wave back anyway. He seems to be generally regarded as a City Asset.

Our penultimate visit for the afternoon, was to Urban Agitator, Chris Chalkley at The Selling Gallery where funds are raised for the People’s Republic of Stokes Croft, a highly organised campaign that advocates and activates community involvement in its own local regeneration; his work has caused riots, garnered attention and instigated change.

The Gallery sells unique and beautiful ceramics and artifacts designed and produced by motivated and talented artists (including Banksy.) I am now the proud owner of a splendid Stokes Croft China “Think Local, Boycott Tesco” mug (I couldn’t agree more.) Shoreditch has a similar but more genteel local regeneration campaign; I wonder if a style more akin to Chris’s agitation would play to greater effect? It would certainly make life more interesting.

Completing our tour, we paused briefly at the lovely home of Alice Ferguson, George’s daughter. Alice is like many parents I have met, just more impressive; she wanted to give her children freedom to play safely on the street, so she founded the logical enterprise, Playing Out. Click the link, it’s damn clever, building in popularity and influence and, just by the way (corporates take note) seeking growth funding right now.

Back at the Loft, a wardrobe change was required on account of a smart dinner party prior to which we expected a flying visit from George’s recently discovered niece Sophie. Remember this, dear reader, for unbeknown to me, this happy new relation(ship) twinkled presciently over the night ahead.

The Smart Car shimmied across town to a grand Clifton square and decanted us outside Number 21, which George confidently announced to be the dinner party location. A strangely familiar woman answered his knock but clearly had no dinner prepared for anyone. Laughing, she directed us next door … George checked his phone and it was indeed Number 20 that expected us. Within seconds we were ushered into the right house, by the beautiful, elegant Bhupinder and her husband Richard, both of whom welcomed this stranger into their home with open arms.

Number 20 was in fact entirely populated by friendly and interesting people and I found myself immersed in all sorts of conversation, not least with the hugely engaging Stephen, reminiscent of handsome Walter Matthau but without the creases. It was whilst chatting with Bhu and George however, that things took a strange turn, for as he explained that my Patisserie Chef daughter intends to revive the Forte’s brand Bhu enquired: “You’re a Forte? She’s a Forte too!” and following her gaze to the end of the table I saw seated next to Richard, the friendly face from next door. 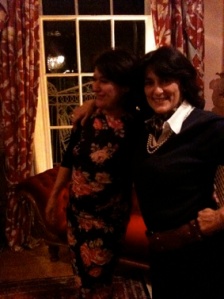 Hearing the name, she turned, our curious gazes met and a micro-second’s stunned silence was followed by rapid, simultaneous questions as to our home towns, parents’ names and history.

The familiarity became clear. Of course! Eyes, complexion, hair, smile. Patrizia looked familiar because I saw myself: subliminally, she reminded me of me. We’re cousins.

My evening at Bhu and Richard’s house took on a most surreal charm and thinking about it now, three days later, I’m still smiling. Pat’s son lives about a mile from my East London home and we plan to meet when she visits. A whole new Family door has swung open thanks to the generosity of strangers and the coaxing of me to Bristol by my lovely friend and, happily a third personal circle completed my stay.

George: all those hats hanging from a wall of your Loft … for my New Cousin, for my Splendid Easter Weekend, may they all magically raise themselves to you right now.

A secretary at 19 and self employed at 26, Giovanna has become a British healthcare entrepreneur. She is also a bon vivant and mother of two clever and accomplished daughters. Youngest-of-All is a talented Patisserie Chef living and working in Melbourne Australia (if you are there, visit All Are Welcome in Northcote). FirstBorn is an Aromatherapy Practitioner (with distinction), a published author and documentary journalist who lives wherever her mood or investigations require. Happily she is currently in the UK.
View all posts by fortewinks →
This entry was posted in Entertaining, Family, Food and wine, Friends, Life and romance, Travel, Uncategorized and tagged Aterlier Ten, Boycott Tesco, Bristol, Chris Chalkley, Clifton, Cousin, Ferguson Mann, Ferry, Fortes, George, George Ferguson, Grain Barge, Jazz, Jazz Disaster, Lakeside, Loft, London Paddington station, No 1 Harbourside, Paddington, Parkinson's disease, Patrick Bellew, Playing Out, red trousers, Smart (automobile), Spun Chair, Stokes Croft, Thomas Heatherwick, Tobacco Factory, train, Urban Splash, Waterway, Zazu. Bookmark the permalink.

5 Responses to Circles in Bristol: Architecture, Science and a Brand New Cousin